We have the sad but wonderful task of describing the last day of the Neflac summer academy to you. Sad, for it was the last day of a wonderful week that we would have liked to continue for a couple more days. But also wonderful because it was the day all our hard work finally paid off. After having breakfast while trying not to spill anything onto our concert clothing we said goodbye to the beautiful landscape and the estate that had been our home for the week. The bus brought us to the Concertgebouw where we took our baggage and went to the artist foyer, from there the usual chaos before a concert began. The rehearsal before the concert was filled with  technical difficulties and last minute adjustments and decisions, but no one lost their nerves through all of this. Everyone, including Sterre Konijn and all of the staff, were very concentrated and worked hard to get the best result ready for the final performance of the week.

When we all finished our lunch we were ready to tune our instruments and open the concert with the prelude from the Holberg Suite from E. Grieg, which we played from memory. The rest of the first half of the concert was filled with wonderful solo performances by Camilla and Phoebe, the NTK and YIP ensembles, Sarah, Friso and Marloes who played a wonderful trio together. And last but not least the introduction for our guest artist Sterre Konijn who sang a beautiful rendition of Summertime by G. Gershwin. The second half was filled by Luna’s Magic flute, a wonderful musical story that Sterre brought to life with the help of some of the young NTK members that did a very good job of acting out some animals featured in the fairytale.
Kasper, Isa, Valdemar 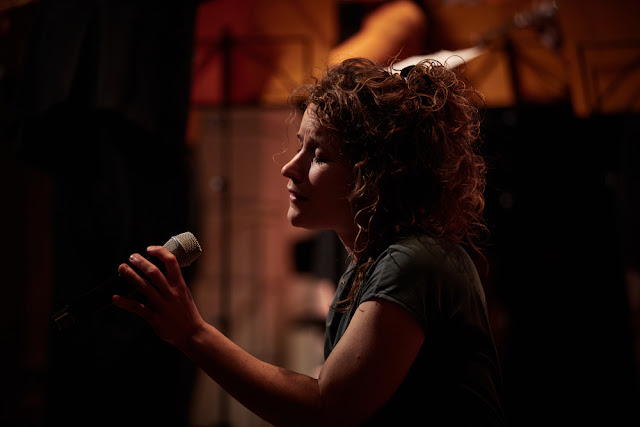 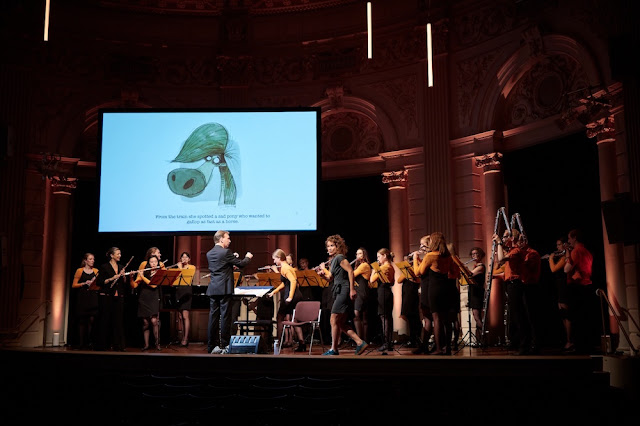 Today we had our last Warm up outside on the lawn before we leave for Amsterdam. We spent the morning with the usual lessons and masterclasses. In the afternoon we had practice performances of our ensemble pieces and chamber groups. During this we also worked on our stage presence that Elsina helped us with yesterday. It was funny to see how everyone performed differently and we helped each other with suggestions. We now feel very prepared for our concert tomorrow!

At lunchtime Emily announced that the NTKs have sold over 100 tickets for the concert so we are looking forward to playing to a big audience tomorrow. The prize for the best ticket seller was tied between Nina, Marloes and Jannemein, who all sold 13 tickets each!

All afternoon we practiced our flute choir pieces ready for tomorrow and worked with the fantastic singer and actor Sterre, who is singing in the concert tomorrow. She is the character Luna in Luna's Magic Flute, which is a story involving many animals. It's been really fun to mix flute playing with acting as this is new for most of us. Sterre had some really funny stories to tell us afterwards about how she once had to play dressed up as a Barbie, and once sung a concert whilst hanging from a crane!

Our bags are packed and we are looking forward to seeing you tomorrow at the Concertgebouw. We are very excited!

We started the day with yoga, which gave people energy after a tiring Wednesday. It was still a comfortable temperature and even though the loud farm animals and red ants were annoying, it was generally relaxing. It was positive and inspiring to reach for the sky.

NTK had a useful and fun theme lesson about expression in music. We learned how to express ourselves with dynamics and how to use that in the music. In groups of 4/5 we had to make a story using only flute playing and no words. We had to perform in in front of one another, and the others had to guess what the story was about. In one story two people were sleeping and two others were mosquitos. The sleeping people used flutter tongue for the sleepy sounds, and the mosquitos used pitch bending for the annoying mosquito noise. We all know how that sounds 😑

The YIP-pers had lessons with Emily and free time to practise, go for a walk or take a nap.

Throughout the whole day, a group of flute teachers from all over the Netherlands sat in on lessons and workshops. They are part of a special course for flute teachers also organised by Neflac.

In the afternoon, NTK and Yip had ensemble rehearsals. These were the last rehearsals before the informal concert we will play for each other tomorrow. It was hot and difficult to focus but there was still a lot of improvement. Luckily we all made it through.

Before the BBQ, we had a rhythm workshop with Niels van Hoorn  on the theme of "groove". This workshop was outside where it was cooler. The workshop consisted of clapping exercises, singing, body percussion, stamping feet and combining all of these in one big group excerise. It was hard to do more than one thing at once, but we perservered. 😅

We had a lovely dinner, which was a barbecue. After dinner, we tried on dresses for the concert, and we had the opportunity to buy discounted secondhanded sheet music. Thanks to Neflac for organising this, and of course to everyone who donated the music!

This brings us to the end of a busy and sweaty (39°C ) Thursday.

We are looking forward to the concert!
Fabiënne, Mariko, Rachel and Nina

PS: Andrew, you are definitely our hero for playing so much music in such hot temperatures, during the masterclasses. Thank you so much! ❤

Our day began with a short walk through the beautiful woodland area to our warm up spot. Wieke led us again through the mantra and we also did group balance exercises. We then got our flutes out for some scales... there were lots of flies because today was a very warm day (38 degrees!).

Jeroen and Wieke led a session on embouchure control where we played on bright yellow, plastic head joints with a propeller attached to demonstrate the direction of our airstream. This was to help us play in tune whilst playing piano, forte, etc.

Wieke led a workshop on the psychology behind planning our practise and we learnt that you cannot learn anything if you are not concentrating(!)... regular breaks and switching up your routine are key!

We also enjoyed rehearsing with Andrew and later performing/listening to more masterclasses led by Emily. The shape of the musical skeleton was a theme throughout both the YIPers and NTK groups. We also learnt that being grounded and not moving too much is important for sound.

After rehearsing for flute orchestra we enjoyed a workshop about 'Using a Stage' led by Elsina Jansen. We warmed up outside by imitating animals (moo...) and then came inside to perform as the flute orchestra - practising  our entrance to the stage, where to look, how to stand and bowing. We felt quite proud to perform for the first time from memory - we're excited for Saturday! 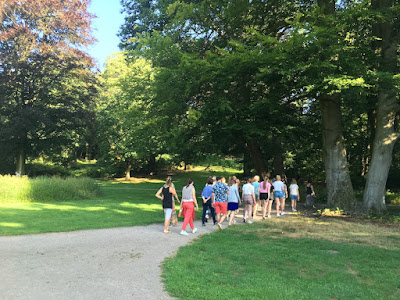 Today was a busy day at Neflac! It was a very warm day, so we were able to spend a lot of time outside. We had a nice warm up and Alexander Technique class under the trees outside while listening to the birds sing! We had a full day of activities including private lessons, group lessons, masterclasses, and ensemble coachings.
In the afternoon, we enjoyed a workshop about Pilates-based breathing exercises, and we learned a quick exercise plan to use in our busy schedules. The planks and squats were very challenging but an effective workout! We ended the day with a healthy dinner and free time to play trios and quartets with each other.

IT IS SO HOT......but we can't complain because we know it will be even hotter later this week... ;) 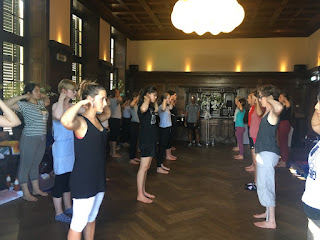 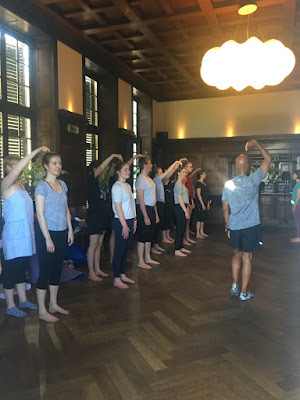 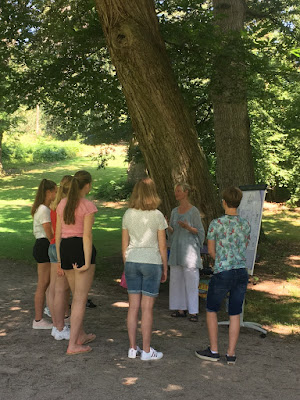 Today we had our first rehearsal in an ensemble. The NTK students played Le Château Hanté by Avinée, and the YIP students played the overture to The Magic Flute by Mozart. Both groups also got together in the evening to rehearse the overture to Grieg's Holberg Suite and Pucihar's Luna's Magic Flute. We are really starting to look forward to our concert in Amsterdam on Saturday!

We also began our individual lessons with Wieke, Jeroen,  and Emily, and learned a lot from masterclasses with Emily throughout our afternoon. Some students also enjoyed an Alexander Technique class in the morning, while others will experience that tomorrow.

We also must mention that in addition to the beautiful weather today, we had an especially delicious pasta dish for dinner!

Keep following this week's activities on future posts from our new friends here!

This was the first day of the neflac summer academy.
We began with ice-breakers to get to know each other, both groups together. Each NTK got a YIPpers buddy and we played different ball games to learn each other's names, in the beautiful grounds of the Rhederoord. This was followed by delicious lunch together outside in the warm sunshine.
After lunch we had the chance to listen to each other, starting with the NTK and then YIPpers. Everyone introduced themselves and the programme they were about to play. The idea of the concert was for everyons to present pieces that we were special to them. We heard many new pieces for the first time and had lots of fun!
During the dinner which followed, we competed to learn the most information about each other as possible, including beloved pets, family and sports...as well as an enduring love for pancakes!
To mark Camilla's 5th returning year to Neflac we got dessert for the first (and perhaps last) time here.
After dinner, more games ensued... Triumphant were the YIPpers, closely followed by the NTK.
Then we wrote this inaugural blog. This week's due to be an intense and exciting one so stay tuned for the next update! 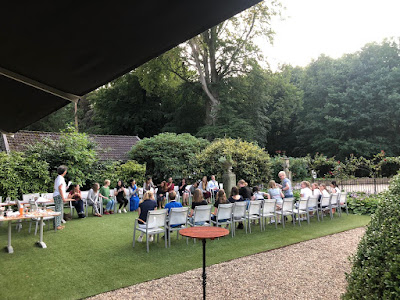